The World Bank has again stressed the importance of innovative products from, and engagement with, the risk transfer industry, the World Bank’s message brings to mind the benefits of insurance-linked securities (ILS) structures.

With climate change reportedly threatening to increase the frequency and severity of natural catastrophe events across the globe and the world’s insurance protection gap (difference between economic and insured losses post-event) seemingly widening, global organisations have placed disaster resilience at the forefront of international sustainability discussions.

The Catastrophe Deferred Drawdown Option (Cat DDO) is a form of contingent financing offered by IBRD to help countries take a proactive stand towards reducing exposure to catastrophic risk and access finds immediately after a natural disaster. Costa Rica was the first country to sign a Cat DDO with the World Bank and subsequently drew down the loan after a natural disaster. The Cat DDO complements other financial instruments and disaster risk management measures in place in the country.

Costa Rica is a small, middle-income country with substantial exposure to natural disasters, including earthquakes, floods, hurricanes, landslides, and volcanic eruptions. According to a World Bank funded natural disaster study, Costa Rica ranks number two in the world among countries most exposed to multiple hazards, with 80 percent of the country’s GDP and 78 percent of Costa Rica’s population in high-risk areas.

Costa Rica has built an efficient disaster response system and established an effective system of building codes, environmental standards, and land use planning to mitigate the impact of natural disasters. It has also made substantial progress in strengthening its institutional and legal framework and mainstreaming catastrophe risk management in its national development program.

In the latest in our series of interviews with figures from the risk transfer and insurance-linked securities (ILS) markets, Artemis spoke with Barney Schauble, Managing Partner at specialist catastrophe and weather risk asset manager Nephila Capital.

Barney has led much of the development and growth of Nephila Capital’s successful weather risk underwriting and investment activities, an area that he sees as set for growth both as a risk transfer product and an asset appropriate for ILS investors. 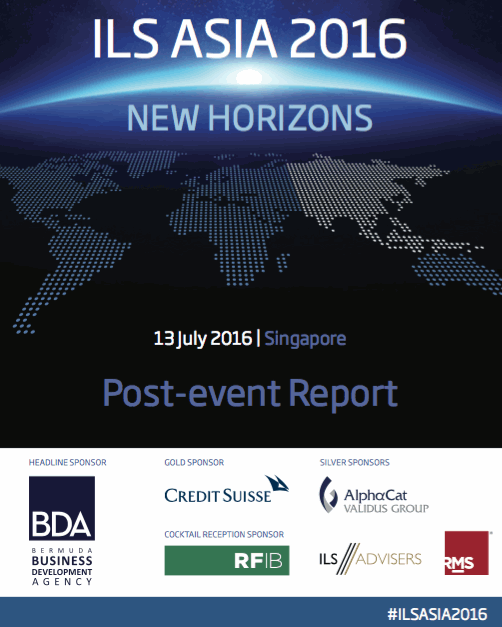 Welcome to the Artemis ILS Asia 2016 post-conference report, which offers an insight into some of the discussions that took place on stage as well as between speakers and attendees during the first Artemis event in the region.

The event took place in Singapore’s iconic Raffles Hotel in July 2016, with over 170 delegates gathering to hear leading ILS and reinsurance market participants from around the world discuss the Asian ILS market’s potential.

The emerging Asian re/insurance and ILS market is widely regarded across the sector as a region with high growth potential, and with Singapore positioned as a hub for reinsurance business across the continent, we felt it was the perfect location for market participants to come together.

The day was a resounding success, and attendees were treated to insightful and thought-provoking discussions surrounding the potential for ILS capacity, and its features, to play an increasingly important role in Asia.

The stake previously sat at just over 10% of the outstanding shares of the Blue Capital Global Reinsurance Fund, after Schroders increased its stake in December 2015.

In order to expand the reach and capabilities of parametric insurance solutions, catastrophe risk insurance pools, and catastrophe bonds across emerging regions in the fight to improve global disaster resilience, risk modelling must be expanded, says a recent report by the Center for American Progress.

Following talks last year among world leaders and global organisations, the need to improve global disaster resilience via insurance and reinsurance solutions was emphasised, following the potential for increased economic and insured losses as a result of more frequent and severe natural catastrophe events.

Collaboration between the Bermuda government and a range of local service providers has enabled the island to become a leading domicile for insurance-linked securities (ILS) business, according to the Bermuda Business Development Authority (BDA).

In the last six to seven years Bermuda has seen itself transform into a global hub for ILS transactions, underlined by the fact that in 2015 the island attracted the large majority (75%) of new issuance, according to a report commissioned by the BDA.

To combat the pressure from challenges facing the global reinsurance industry, as competition, the low interest rate environment and headwinds limit growth & erode returns, participants should look to partnerships and innovation as a way to stimulate demand.

Innovation is one way firms can stimulate growth in emerging risks and regions, which can be helped via the support of regulatory and governmental organisations, according to Munich Re. Advice that is also relevant to the larger ILS fund players, who are increasingly gaining a profile in these circles as well.

We are delighted to meet and discuss ILS, ABILS, Bermuda and CEE regional trends.