Europe isn’t a region well known for intense seismic activity, but large earthquakes do happen. In 1953, a devastating 6.8 magnitude quake struck the Greek Ionian Islands. Though these large events tend to be the exception rather than the rule, a flurry of significant earthquakes struck the Balkans on November 27 2019, with epicentres in Bosnia, Albania and Crete. Geologists are worried that these events might gain momentum, with larger and more destructive events imminent.

Should residents be worried? The Balkans – a region stretching from Croatia to mainland Greece, and the Greek islands to the south – has a very complex geology. The whole region is tectonically active due to compression of the Earth’s crust further north and subduction – when one tectonic plate moves under another – to the south. Each process plagues this part of the world with frequent, though usually small, tremors.

Aftershocks are common after large earthquakes, as the region’s geology readjusts to the new tectonic arrangement. This means the recent quakes in south-eastern Europe aren’t unusual, but they may not have released all the pent up seismic energy in the region. Numerous laws of geology say that these shocks gradually subside in magnitude and frequency as time unwinds after the main earthquake. Although poorly understood and believed to be quite rare, earthquakes, instead of petering out into smaller and smaller tremors, can sometimes cause a cascade of further violent quakes.

Perhaps the most extreme episode of cascading earthquakes in recent history happened in New Zealand in 2010. In September that year, New Zealand’s second city, Christchurch, suffered a 7.1 magnitude earthquake, which occurred to the west and shook the city violently. But afterwards, residents and scientists alike felt relieved that they had a lucky escape. 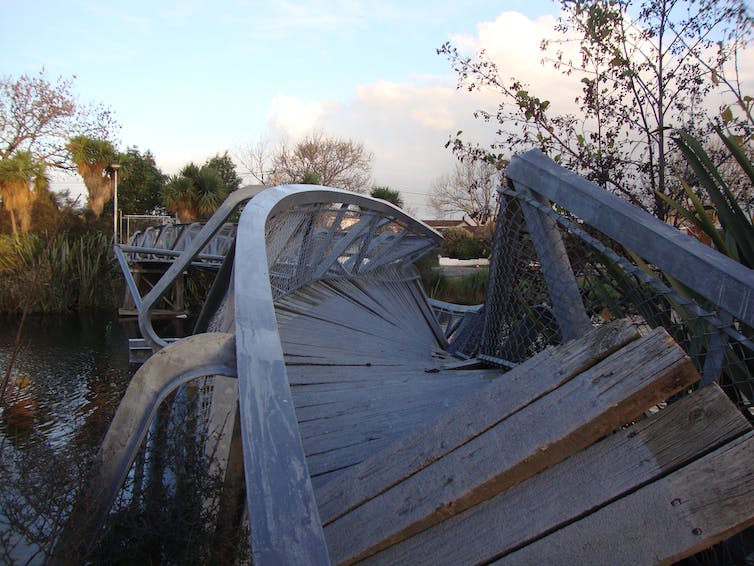 The Medway footbridge in Christchurch was twisted out of shape by the earthquake.
Schwede66/Wikipedia, CC BY-SA

Tragically, this was a prelude to a destructive earthquake in February 2011 which struck right beneath the city itself, killing 185 people and causing widespread devastation. The downtown area was largely condemned, along with vast swathes of the city’s suburbs. Following the first event in September 2010, more than 10,000 aftershocks followed.

So while geologists often expect aftershocks to be smaller and less destructive than the first, this isn’t always the case. Aftershocks may bring down buildings that were weakened by the first quake, or hinder rescue attempts of those trapped in buildings by the first one. Anyone responsible for managing the hazards that come with earthquakes must be aware that cascades of further destruction can follow. 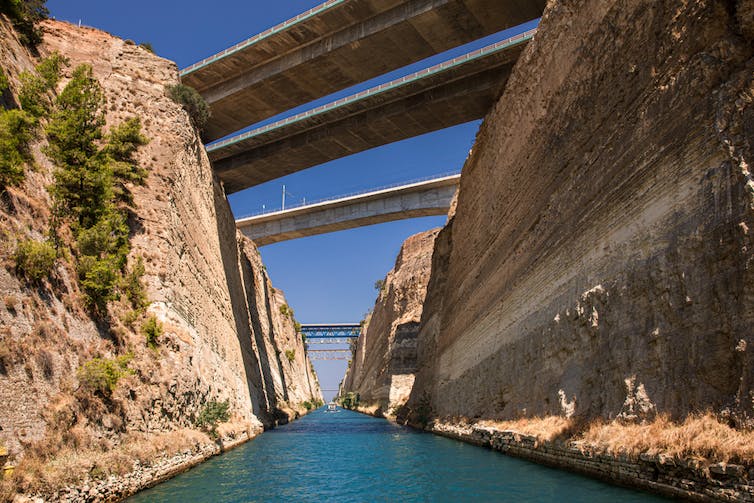 The Corinth Canal in Greece connects the Gulf of Corinth with the Saronic Gulf in the Aegean Sea.
Victoria Kurylo/Shutterstock

Geologists are particularly worried about the Gulf of Corinth in Greece, an inlet of the Mediterranean that effectively splits the Greek mainland in two. Here, a process called continental rifting is forcing the Greek mainland apart at an average rate of 15mm per year. This rifting process isn’t smooth – stresses can build up and once they reach a certain threshold, rocks can fracture and an earthquake can follow.

Within the Balkans, there have been 17 earthquakes with magnitudes greater than 6.0 since the 18th century, each with many aftershocks recorded in the days following. Models have suggested that these cycles of earthquakes and shocks are set to continue. So it’s not uncommon for one earthquake to cause another, and another, and another. Armed with this knowledge, people should be wary that when an earthquake strikes, it may not be an isolated event.

This article is republished from The Conversation under a Creative Commons license. Read the original article.